Learning to Express Yourself is a Key to Success.

Many people can’t ask for what they want because they don’t know how to express it. I was one of them. Now look at the word ‘express-ing’, it means fast, speedy and direct. As a kid I had a stammer from god knows when till a teenager and dreaded queues in shops and ticket offices. By the time I was asked what I wanted nothing came out but splutter, shame, public humiliation and deep embarrassment, everything except fast, speedy and direct.

On top of this I had a nervous squint. I contracted meningitis on the spine when I was 6 months old and over the next 12 years was a frequent visitor to brain damage tests with a final conclusion that I will ‘grow out of it’. Well I did when I discovered alcohol & drugs. This masterful brew gave me confidence, a clear speedy voice, though often sharp and bitchy. In future therapy sessions, I was told it was an act of survival, an old pattern, thinking I could not be heard. Oh and I was ‘a red’, a ginger, an outsider and gay, way before fetish sites put red as a hot topic of sexual attraction. All in all, a teenage nightmare. No wonder I embraced getting ‘out of it’.

We had no knowledge about addictions, codependency or ‘finding yourself’ in self help books in the 70’s, it was all about sexual liberation, learning to express yourself through your body, so I soon got the hang of that. Less talking, less stammering, less nervousness, more action.

This inadvertently led to many years of sexual addiction until a virus took hold of my priorities, being forced to learn how to express myself ‘to serve myself first’, not heed to the demands of others. This aspect of codependency is rife in the gay community and often leads to unsafe sex as people-pleasing leading the way to a man’s zipper, but the desire to be connected, to belong, to seek approval as an act of expression, can leave you short-changed when it comes to emotional satisfaction. Clearing up the mess of others as fixer, or being entangled in a relationship with someone who cannot express themselves via depression, past abuses, alcohol dependency does not bode well in the healthy relationship stakes.

Assisting or understanding a partner with these issues, while detaching, in order not to get sucked in, is extremely difficult, but essential in order to manage your own sanity. Learning to say NO more often and ridding yourself of the belief that ‘when you get YOUR needs met, others lose’ is the key to emotional recovery. This may appear selfish in print, and to some unloving, but in reality the biggest aspect of relationship breakdown is ‘ not getting needs met’, because often those needs have failed to be expressed because of ‘harming’ the other person. Not wanting to rock the boat by telling the truth faster creates suppressed anger, game playing, dishonesty and fear. The opposite to love.

When I started a recovery process from active addiction over 30 years ago, I shockingly discovered I was shy. Quite the opposite from the persona I had created. Then I had to learn to communicate verbally & sexually without chemical support, and the stammer came back along with the nervous squint and it felt like I was back at square one, which I was. Back to being the emotional wreck of a teenager with the luggage of 17 years of using.

With self help groups and counselling I managed to explore the reasons, and the lessons of coping with and managing demons like ‘Not being good enough”, “feeling damaged” “not a real man” etc and turn these negative lies into positive statements of truth. In 1984 I began spending every night, for the next 3 years, going to sleep with Louise Hay affirmative tapes on a loop in order to find the real me buried beneath the shames. Then with yogic rebirthing breath work started to express my subconscious emotional fields, until I healed my body and released chronic active hep B from my body in 1996 without medication. That’s a whole story in itself.

Eventually the stammer and squint left me, confidence was acquired and I learn’t to ‘tell the truth faster’. For the past 10 years I have travelled the globe every 2 months leading seminars on personal development, holding a room of 30 -50 people for 3 days without a manual or script, just focussing on ‘the NOW’, and allowing things to occur organically. So perseverance paid off. The only way I could express myself in my using days was by being workaholic, by constantly thinking I needed to be in control, while my life was totally out of control. Today I am still clean, sober and Hep B free, long may it continue, a day at a time. 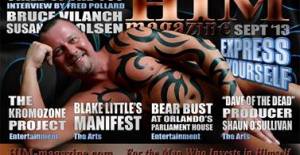 You would think by the amount of HIV related material rammed down our throats for over 20 years, that it’s the only disease we suffer from. All government funding around HIV/AIDS began to dry up in the mid-nineties from the HIV pot when combos came in in 1996, it was combos or support services, not both, so fundees hunted around and found excess cash in the Mental Health budget to continue filling the AIDS industry coffers. PACE popped up, other agencies appeared but still the main focus remains HIV/AIDS. Even PACE’s strapline still says . . . sex, relationships & HIV. This serves to collude with the notion that HIV is the main issue for gayers when in fact (as any prison or hospital will tell you) alcohol and drug abuse is the REAL issue for individuals. So in order to serve the PC world of funding, we put the cart before the horse. No one dare speak of the elephant in the room, the love that dare not speak it’s name: we take too many drugs.

The amount of gay addicts around is very small compared to a majority who know they do “too much”, and it’s this grouping that maybe needs to consider a more purposeful approach to getting trashed.

No one wants to stop the party – just leave earlier, it’s an easy sacrifice to make. Many Doctors remain frustrated that recreational drug use is compromising the work of combos, that gay mental health is only brought up when a G overdose is mentioned, that Hep C amongst gay men is rising fast within those with positive status. Places like PACE can attract those already interested in the healing process, and it’s good that they exist but that big majority who do “too much” would rather eat a snakes cock that present themselves at those hallowed doors, or enter a support group.  If this was not true, PACE would not need a big ad budget to promote and sign people up for FREE workshops – the queue would already be there.

The reality is that groups are just not AD FAB enough, nor is the concept of self observation of any kind. The scene is being dominated by induced emotions via chems, unsafe sex is being acted out via alcohol, dry cleaning fluid, horse tranquilliser and home made meth factories : not really what Oscar Wilde had in mind is it?. Doesn’t it make sense to reduce the stuff we put in our bodies before we stuff someones brain out?

Just because I haven’t used chems or alcohol since the early ’80’s, does not delete me from debate. In order to stay alive I needed to sacrifice, let go, wake up and create my own place in the gay arena without chemical support.

It was hard at first, living with Chronic Active Hep B, a virus 100 times more infectious than HIV, as an unknown supercarrier infecting other gay men for 12 years without any symptoms myself. When I finally stopped using and drinking, my cirrhosis scarred liver worsened into liver failure again and again. My eventual recovery without medication of any kind, plus a lot of personal development and breathwork therapy, released the Hep B virus in 1996 from my body, the same year combos arrived for those suffering with the impact of the HIV virus.

So I know it’s possible to change lifestyle, thought patterns and habits.

The keyword is SACRIFICE. Now I know that sounds a bit religious but the truth is that if we reduced our intake of chems, became consciously responsible enough to wear condoms and drank less, the HIV figures would tumble. Yet the services available and the funding required for drug & alcohol support agencies, especially gay ones, is a piss in the ocean compared to the HIV gravy train.

The cart before the horse is not going to win the race. No one is suggesting stopping the booze or avoiding coke but jesus, look at yourselves. Without checking out yourself and taking action, denial will remain a constant companion and its a difficult friend to drop, but without the concept of sacrifice we will not survive the turmoil. The credit crunch has woken us up to debt and if banks carry out the threat of hiking up the minimum payment for credit cards then many gayers are going to have to change address, gone away, address not known.

If each gayer reduced intake of substances, relationships would change, depression and comedowns would be lessened and people could stand a chance of finding themselves again. I can’t safely use again, I crossed that magic line into addiction, but you can check out your habits and reduce party pleasure before the future need to checkin to a rehab. It just takes a little sacrifice on your part, a little practice each day to create a big result. Start making a list now of where to begin this worthwhile journey of consciousness and personal responsibility.