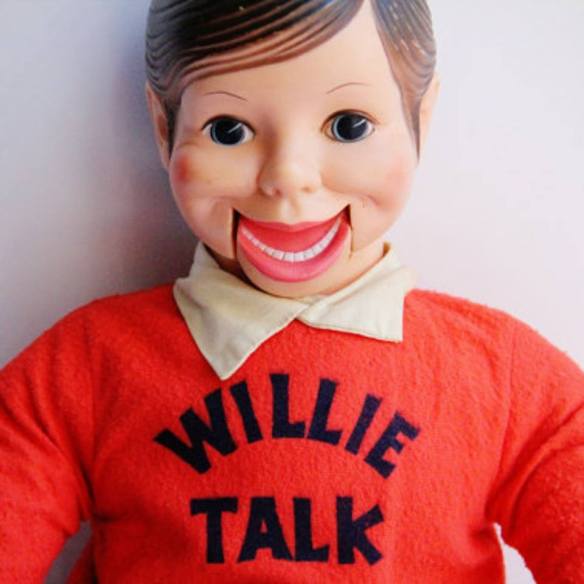 We know that digital use is killing conversation in LGBTQ circles as much as anywhere else. Apps have offered the opportunity to flirt without follow through. Nothing wrong with that. However if you just TALK in soundbites, emoticons and short texts that include the word HI as starters, you are not exactly in practice for the real world. Chems & Booze are not always the answer for shyness and low esteem so consider COACHING as an option to find your voice. 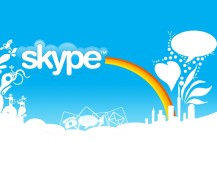 If you have any of these issues maybe it’s time to TALK to someone, 121 or Skype. Time to have a relationship with yourself maybe. #gayCOACHING

David Bridle, the MD at Boyz, said about the issue “I’m really proud of the new issue of Dirtyboyz – out today – which marks the 50 year anniversary of the passing of the Sexual Offences Act with a ‘1967 Decriminalisation Special: When gay sex was a crime’. The edition includes an interview with gay therapist David Parker, an homage to Joe Orton by Daniel Warner and a cover feature interview with the great British gay porn photographer Mike Arlen by Adam Clifford – and Mike photographed Adam for our 1960s style black and white cover. Dirtyboyz is for gay adults only and can be picked up now in London at gay shops, saunas and over-18 bars and clubs – and across the UK.”

See the full interview from Dirtyboyz Issue 48 August 2017 below or check out their website www.dirtyboyz.xxx/Dirtyboyz/48/index.html: 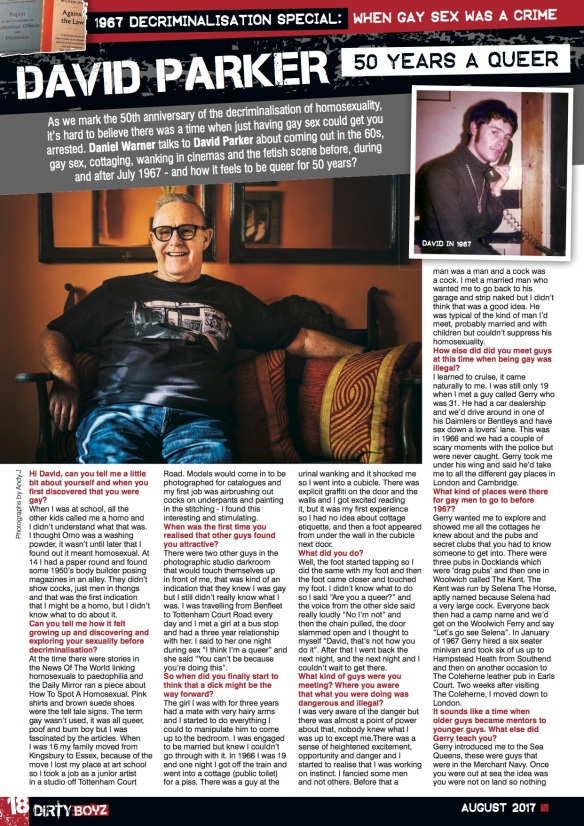 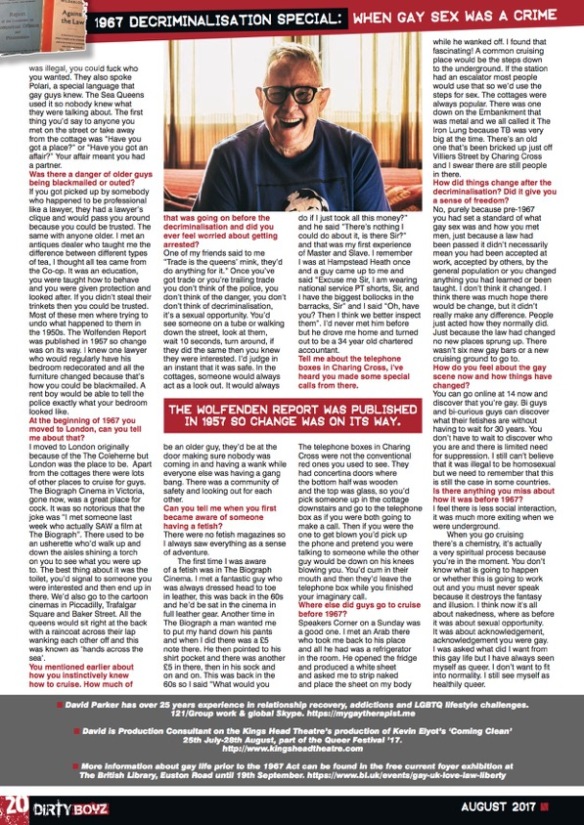 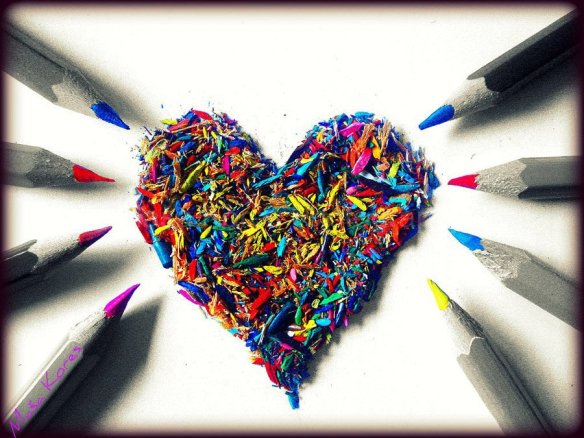 Don’t be afraid to show your true colours. The ultimate in lazy dating starts with what I call ‘profile paralysis’, the art of having nothing to say, but it just can’t be closet voyeurs that have nothing on their profile but ‘Hi’ and ‘just ask’. Sadly this epidemic of shyness, affecting all age groups, is now as ubiquitous as a kitten pic update on social media. Way before the internet, gays found dating heaven in the classifieds of magazines and gay papers, but if you were looking for speciality sex, olympic sex or even someone to settle down with, the ads all read the same rhythm : tediously boring. TIME OUT London’s listing weekly magazine was one of the first to list ‘men for men’ classified ads in the 1970’s, but had to add ‘over 21’ in the header to comply with the law relating to Age of Consent. This sparked a continuous trend until the mid nineties when LOOT a ‘find anything you want to buy or sell’ newspaper had specific sections for sexual activity, including introducing us to the word ‘bi-curious’, and at the same time gay writer Mark Simpson coined the phrase of the decade : ‘metrosexual’. Now you would think that all these tribal divisions of sexual play amongst gay men would create imaginative, stimulating prose. Far from it. 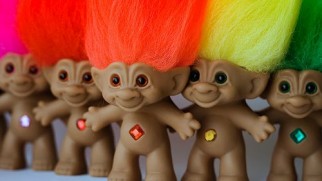 The straight ads for opposite sex hook-ups were by comparison witty, informative and amusing. The gay section in the same media read like a shopping list of desires ending with no fats, no fems. So much for the myth that gays can gentrify any area by moving in. Maybe this stems from man-to-man anonymous sex founded on sexual attraction first, ask questions later, while straight dating at least has the formality of asking a name before they unzip. Mind you I can understand that if you happen to be partaking in rough sex, a name or even a voice is off-putting.

I could never understand how you could screw up a presentation of yourself in 30 classified words, but some years later I led a seminar on Dating for Gay Men, and discovered that given the opportunity to write a biography of themselves in 70 words most just sat there chewing a pencil or gurning gum until inspiration interrupted the endless void. Most never made even 30 words to describe themselves. Try it.

What I did discover was that in ‘profile paralysis’ they used words or phrases that other’s used, no innovation, and on discussion it appeared that this was part of a sense of belonging and avoiding rejection by remaining minimal, so most writings consisted of what they thought people wanted rather than who they really were, and who they really were, was not good enough. The reality is that people are looking for uniqueness, good or bad. Quentin Crisp once said that defects of character were a bonus, stating that when friends said ‘ the trouble with you is . . ‘ remained the most interesting aspect of their personality. The situation we find ourselves in now is easier smartphone hook-ups where there is just about every fetish available online, including fats and fems so denigrated in previous decades, who have come into their own. Big boys, Ladyboys and experimenting straight boys who need direction and attention, all hold a place of dating opportunity. 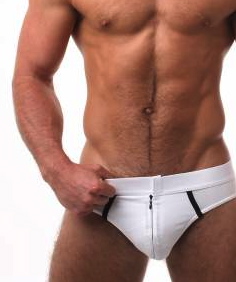 So get busy and check out your own GuySpy profile and market yourself with gusto. Has it got tired? Has no one asked? Maybe it’s less than 30 words? Try adding a few quirks, queer hobbies or even a few defects, after all these things make up a well rounded character. Lazy words creates lazy dating & profile paralysis creates stuck energy, so ruffle through a dictionary and make readers think, instead of stare then click over, amuse them with flair and constantly review your pics, especially the old iPhone self shots in the bathroom. It’s over, they are everywhere, and that one when you looked HOT 4 years ago with a tan and now you look like a boiled hot dog in too tight pants, is not the best way to demand ‘no bullshitters or dishonest types’. Look in the mirror.

Do the pics match what you see?

Oh . . . and your real age would be a good beginning too. If dating turns into a relationship, trust is already soured, so remember – truth and individuality wins out!

#instagay #gayboy #love #lgbt #lgbtq #gayguy #gaylove #gayman #followme #gaylife #gays #homo #gaystagram #gayfollow #gaycoach #gaypersonalgrowth #recovery #gaysoul #gayspirit #gayrelationships #gaylifestyle #gaybears #gaylondon #queer #queerhistory #nonbinary #genderfluid
Salome Oscar Wilde 14th - 25th May 2019 Greenwich Theatre London. #queerhistory #queertheatre #queerlondon #gaymen #instagay #homoerotic #homosexual #lgbtq #lgbtq🌈 #lgbt💛💙💙🏳️‍🌈🇨🇴💗 #oscarwilde #lazurustheatrecompany #gaymen #gaymen #londontheatre #gold #sexyguy
Hanky Codes are part of queer history and gay subculture. Way before Grindr outside and bar cruising was the norm in the 70’s and 80’s. In ‘heavy’ gay bars, leather men, BDSM & beyond, the hankie code was essential to avoid time wasters. #lgbtq🌈 #queer #leathermen #leather #muircap #hankiecode #bdsmcommunity #gaymen #gaymensex #instagay #gaydaddies #leathermasters #homo #homosexual #homosexuality
In 1984 I was part of a group of volunteers to start the first mixed media creative promotions group around SAFER SEX as we called it back then for THT. No one knew what kind of sex was safe, it was too early in the epidemic. How can we get gay men to show they wanted safer sex? I came up with an idea. If gay men were prepared to display the ‘hanky code’ of colours in their back jeans pocket, why not a safety pin to indicate safer play? Some already had mini teddy bears in their back pocket to indicate ‘cuddles no anal’ due to fear. So I designed a safety pin logo with the word safer on top and sex on the bottom of the pin, all in wire metal. It took off quickly. Guys were seen in bars with a small safety pin attached to their denim jackets, on collar, top or back pockets. Some brazenly wore a kilt pin for size queens. 😍 We had no rainbow flag then in use but this pic reminds me of those ‘russian roulette’ days of fear, disease and imminent deaths all around. #queerhistory #queerlondon #tht #aids #aidsawareness #endaids #hivaids #gayinsta #instagay #gayman #rainbowflag #lgbtq #lgbtq🌈 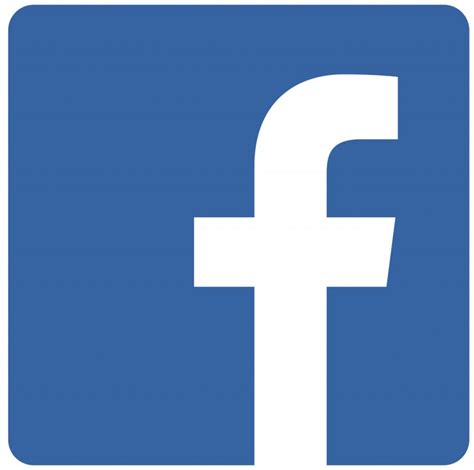