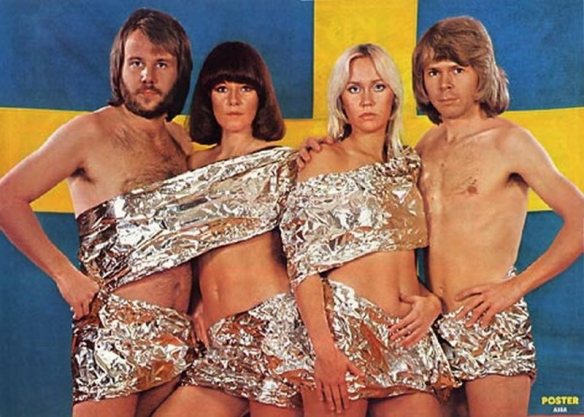 ” You don’t know the meaning of true happiness until you hear 30,000 Gay Men recognise the opening bars of Dancing Queen “, so wrote a str8 journalist for the London Evening Standard, reporting on the Opening Ceremony of the GAY GAMES in Amsterdam in 1998. You can imagine the rush, the sense of belonging, the HAPPINESS in those brief riff seconds of connection. Clubland, Disco and secret nightclubs have always been our haven. The chance to be ourselves, to be authentic, to be free, to be queerly relaxing with our own kind. Dancing Queen by Abba certainly captured the essence of underground popper sexuality, way before ‘hands in the air’ circuit party chems, became the norm.

Some of us recall the re-emergence of the word ‘Queer’ in mid-AIDS politics in the early 90’s, the snatching back of a mid-twentieth century term of attack. Now post-millennium the word QUEER has a changed yet again into a term embracing all sexualities and genders, indicating alternative, creative and avant grade. I was called ‘a queer’ at school, or an ‘OMO’ so I was queer before ‘gay’ became commonplace and ironically both words mean ‘happy’. One of the things I hear time and time again from gay men is ” I don’t fit in”. They answer to that is ‘you don’t need to, in order to be happy’.

In the UK, the hot TV programme mid-nineties was ‘Queer as Folk’ a radical, tell it like it is, drama series. In Northern England, they still say ” there’s nowt as queer as folk”, as they did the previous century, because the word queer meant ‘odd, unconventional or eccentric’. At the same time as this trailblazing show, I was knee deep in a new book by Dr David Weeks and Jamie James, the first scientific study of eccentric behaviour called ECCENTRICS. The conclusion of this study was that odd ‘queer’ people were the happiest people on earth because they didn’t care what people thought. No shame, no fitting in and certainly no people-pleasing. We have a lot to learn from them. At the last chapter I switched from seeing my queer sensibility as an asset, not a cross to bear as an outcast. I was particularly taken with Ann Atkin from Devon England who not only had 7,500 gnomes in her garden, but dressed as one on a daily basis. She was as happy as Larry, supermarket shopping with red cheeks and a pointy hat. Good for her! Dr Weeks concluded that eccentrics were nonconforming, creative, idealistic, aware from early childhood that they were different, intelligent, and in possession of a mischievous sense of humour. Well as I ticked all the boxes, I went from queer to eccentric and back to queer, I saw it as the same in the end. Living queer without performance breeds happiness.

Armed with bravery and my new eccentric weapon of freedom I could be whoever I wanted to be. From that point to now I recognised my eccentricity as vital, my different-ness, and my somewhat rebellious lack of desire to fit in as an asset. Masculine fashions change anyway. The streets of East London particularly, are paved with the ‘new queers’, inked skinny bitches who refuse the mantle of porn masculinity preferring instead the odd, the punk and the scruff. Funny how these guys will be cloned into the norm sooner or later before the next batch of queer look appears. Happiness, and the experience of it, is relative, and as diverse as our LGBTQ community. It is no companion to shame or apology, for accepting who are, results in a happier disposition. Coming out as queer, eccentric, gay, bi or whatever word you use, also means being as brave as Ann Atkin in her pointy hat, in cultures, communities,and churches. It’s a brave but essential road to walk, but remember those liberating queers that walked before you, respectful head held high, learn from that. Gay marriage is not for all, or even being in a relationship for that matter, but real happiness, queer or not  is being content with what you HAVE got, rather than what you haven’t. Truth, authenticity and loving yourself  exactly as you are, is a great boyfriend to be happy with. Do you walk this road?
__________________________________________________________________________

Checking out queer films I came across this blog of listed queer films, if queer history interests you. At the time of Abba, men cruised the streets, not on-line, and when the concept of AIDS was sci-fi we used instinct, not profiles. I was particularly impressed with his opening quote ” I’m bored and depressed with today’s gay image of marriage, adopted babies and content bourgeoise living. Blandly masculine, domestic and inoffensive is the new gay stereotype and I can’t relate anymore. This list is a tribute to tough queer thugs with switchblades, bisexual hustlers, sissy villains, killer drag queens and true outcasts, films that got me through my years as a sexually confused teen. I’ve also included some (occasionally offensive) homo horror for the hell of it “.

this blog first appeared on my regular RELATIONSHIP GUYD column on http://guyspy.com