In some quarters to admit “being in therapy” is as shaming as owning membership to the Jan Moir Fan Club, so you might wonder why gayers seek it, pay for it and continue the process of on-going examination. Coming out as “being in therapy” is the new celebrity ring-a-ding these days, going into REHAB is so over, unless your recording contract insists on it. In order to experience real freedom most need to sacrifice something, including the freedom to be reckless in our lives. You may think that having a freedom flag mouse mat while you lose 6 hours on Gaydar, is the freedom to be who you are but REAL freedom comes from inside – not from a flag.

To find that freedom, a sense of balance and a wake up call is the reason many smart gayers choose therapy, counselling or coaching of any kind as a route to change. In decades gone, it was all about “accepting yourself as gay”, now it’s about “accepting yourself as a crack whore”, serial debtor, codependent, a boozer or someone who just CAN’T find a relationship. I blame Thatcher. It was the mad month of March 1988. Thatcher brought in Clause 28 and free newspaper Capital Gay said “unless you get out on the street, Thatcher will close the Gay Bars. Until that time I had never seen 36,000 gayers and their str8 friends in one place, but I remember looking back on the march when we reached Piccadilly Circus, and all I could see as far as the eye could see, was US. Now that’s REAL freedom, and instead of controlling gays Thatcher was actually responsible for the 60,000 people who turned out for the 1988 Summer Gay Pride March that same year. Yes we marched then, not celebrated. How times change.
_________________________________________________________

In the late eighties and just after, you only “had therapy” if you were close to someone with AIDS, had AIDS or had received an HIV+ diagnosis and told you were about to die. It seemed we weren’t affected by other diseases aside from the dis-ease of being a gayer, we had no other mental or physical health issues. In 1998, a decade on, I was invited by EUROPRIDE (that year in Stockholm, Sweden) to present my own series of seminars I started in London in 1994 called QUEER LOVE QUEST, to be the first Gay Personal Development Programme ever to be part of the official Europride festival itinerary. The tide had turned and a claxon of gay issues like homophobia, ageing and addictions were being addressed in an open political way. Thatcher had long gone, Nu Labour was the flavour, combos had arrived and our freedoms began, but without that vile attack by Thatcher, we would still be simpering and apologising, sitting on the fence.
_______________________________________________________
Many different forms of therapy exist, but the purpose is the same, FREEDOM from the past and present habits, resentments, toxic shame and guilt. Watching ITV’s Loose Women the other day I was shocked that half the panel saw therapy as “self -indulgent “. Codependency has often been described as a pattern of behaviour where you lose your own sense of self while caring for, parenting, worrying, rescuing or taking too much responsibility for others. Along the way we have been told that others come first, so I can see that within this context caring for yourself would be “self-indulgent”. Prompted by some gay activists we have been told for so long that we are just like straights now and should not have “gay issues” anymore, we are just humans not defined by sexuality. Unfortunately the “issue” is still that you can’t walk down an average street holding your same sex partners hand in complete freedom. Until we can do this with ease we have no cause to wave a flag. Until we can safely get off a bus and not hear homophobic abuse from feral youth or be beaten to death for standing our own ground we will not feel free. In order to handle these outside interferences therapy can teach you to feel free from attack, free from the judge and jury in your head, and free to live in the world of extras. I call it this because when you reduce a habit, or change an unhealthy routine you find extra time, extra interests and extra pride in yourself. 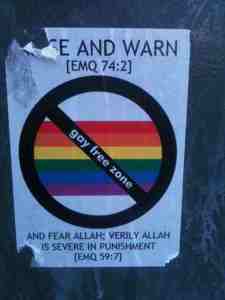 So while you fiddle with your mouse mat consider where you feel FREE today – is it on grinder for a spontaneous shag, or having a purse of disposable income, a chance to be yourself in a relationship, to speak honestly avoiding people pleasing, or do you think that you still have “issues” that cost you more than money. Maybe you think that being political is only for activists, that your voice and vote don’t count. All forms of therapy create awareness and in a lot of cases a realisation that we are not as free as we think. The usual escape routes we encounter encourage procrastination and denial. Are you going to sit back when a vigil takes place in Trafalgar Square, to fight against energies that hate your very existence? Are you going to stand in a bar or make a stand in a square? While you ponder that, consider the 36,000 that marched that winters day in 1988 for the right for YOU to feel free and ask yourself how political you are, what you do about it and how loud your voice is. The recent events in East London have spurred the young into reality, marching, shouting and proclaiming against hate. To do so with such vigilance is a combination of freedom and therapy. Join them and see how therapeutic it is. Then wave the freedom flag.